If you had told me, back in 2009, that it was my year, I would not have believed you. Very few things in my life at that time indicated I was on track. Isn’t it comforting to know that your life can be on track without you realizing it? It suggests that your life might also be on track at this very moment, totally unbeknownst to you.

In 2009, I was a junior in college in Minnesota. What I recall from that time is mostly the sensation of being very cold and entering a warm building, or of leaving a warm building for bitter cold. I know I took French but never learned the language. I recall a geology class in which I felt stupid. There were some men I wanted to date and some men who wanted to date me but, until Tony, the two circles never once overlapped.

Time travel is science fiction, except that it isn’t. I have an old suitcase of my grandma’s with the luggage tags still on it.  Her address is written inside in her careful, old-timey script. When I hold this suitcase, I feel as though it has come through time to me, like a passenger on a long trip. Several people stored this suitcase in various closets, bringing it with them through time, in order for me to use it. I want to say, to the suitcase: you made it. You must be tired. 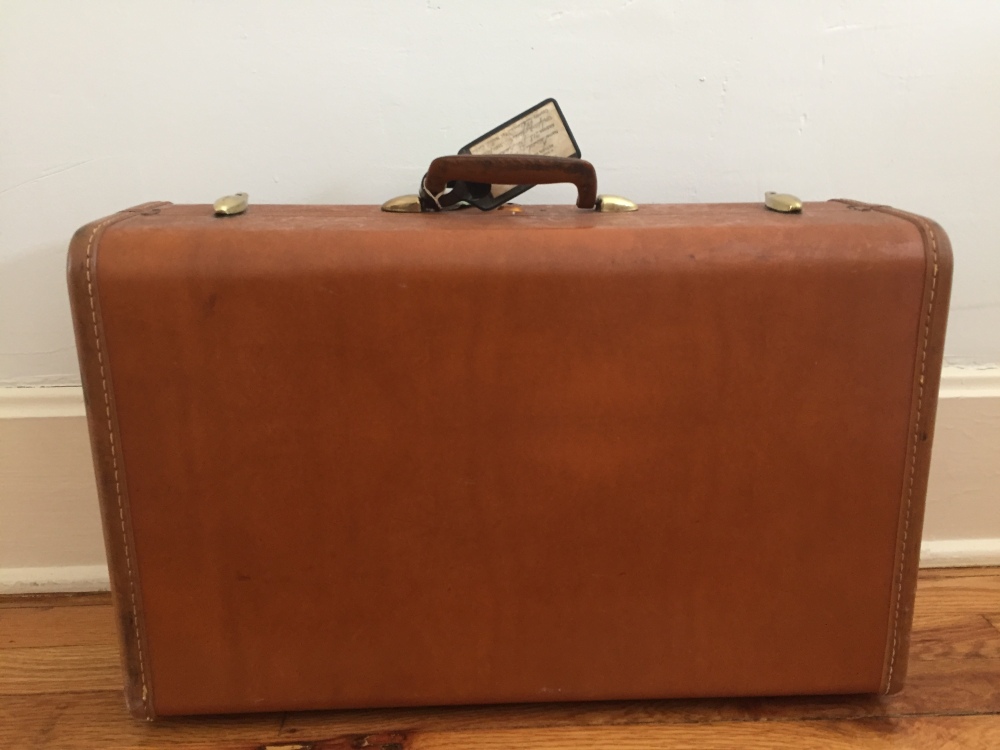 I also feel this way about the very old and very small shoe Tony and I once found, partially buried underneath the porch of the house we used to own, which was built in 1904. Out of everything the original owners of the house and their children had: this shoe.  When we sold the house we left it in the shed because it didn’t seem right to take it.

We are all traveling through time, however slowly. Objects travel with us at the same speed. And yet some objects seem to me to condense time by virtue of existing. When I think about my young grandma with a new suitcase, or a kid losing a shoe just after the turn of the 20th century, it feels like time itself has vertigo.

Sitting in my car at a red light, I have a similar feeling. My daughter is in her car seat in the back. I have loved her completely for two and half years. I carried her in my body for nine months before that. And still, at this moment in the car, it is as if I am just arriving here to the news of her, of us, to the current me that is her mother.

This sudden awareness of my daughter has happened a half dozen time since she was born. Of course I know I have a child in between these moments, but it’s so big I can only fully grasp it at odd angles. I spend my life with her mostly swimming underwater, without realizing there is anything above or below the current.

I have a childhood memory of my dad coming home from work and thinking that my mom was sick. He thought she had a thermometer in her mouth, but actually it was the stick of a Tootsie Pop. I was eating a Tootsie Pop, too. I do not know why we had Tootsie Pops, but I remember the confusion. With everything I can’t remember from childhood, why this?  It is as clear to me, or maybe clearer, than my memory of the day my daughter was born.

Einstein’s theory of relativity suggests, in part, that everything that will happen has happened. Our perception of the flow of time is an illusion. Our lives exists completely, from birth to death, and have always existed. Everything we do and say and think exists alongside all of human history, the Big Bang, and the end of the world. Our lives are in fact always on track, heading towards an inevitable future.

If the future already exists, then love at first sight might be the future reverberating back into the past, like how an earthquake causes seismic waves on the other side of the Earth. Maybe when I met Tony he was– in the simultaneous future–  my husband and the father of my child. I should have known when I met him. I didn’t, but I did feel differently about him than anyone before or since.

For work once, years ago, I was at a fundraising event at which a college student sang “Some Enchanted Evening.” He sang it not like the more popular Frank Sinatra version, but like the original South Pacific version, with all the operatic trills. He was a big man with acne. And somehow you know, you know even then. His voice was deep and powerful.

I do not like operatic singing and I feel awkward at work events. Yet that remains one of the most moving live musical performances I’ve ever encountered.  I know it’s beyond cliché to think of one’s partner when listening to that song but, Tony, I thought of you.

Because he knew I liked it, Tony used this passage in a poem he wrote for me, on my first mother’s day with our daughter two years ago. “Replace God with  mom,” he then wrote, in the poem. When your mom brings you into the land, there will be great and good cities that you did not build…

“Rub me,” my daughter says, when I put her in her crib at night. She means that she wants me to run my fingernails gently up and down her arm, how my grandma used to do for me, and Tony’s grandma did for him. She is predisposed to enjoying the sensation of almost being tickled. I bend over her crib in the dark and run my fingernails over her arm while she falls asleep. For a long time she was a terrible sleeper, but now she isn’t. Her chubby arm is the softest thing I’ve ever touched.